Flea bites cause itchy papules, which are often in groups of three, the so-called breakfast, lunch and dinner configuration. Human fleas, Pulex irritans, are relatively uncommon in North America. The most likely species to bite humans are the cat flea, Ctenocephalis felix, or the rat flea, Xenopsylla cheopis. Fleas are known to transmit the bacteria that cause plague, although this is uncommon in North America. 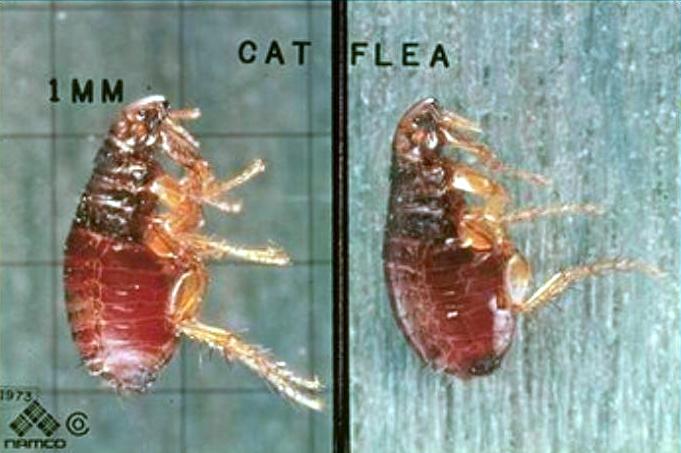 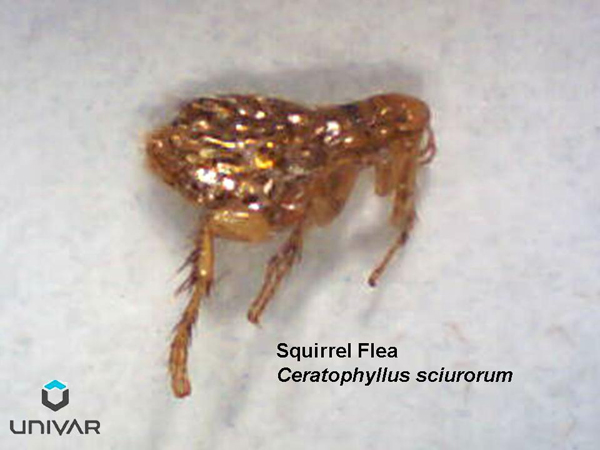 Fleas are bloodsucking parasites of birds and mammals in the order Siphonaptera. Adult fleas are flattened from side to side and are wingless. The larvae are pale and caterpillar-like. Fleas can travel rapidly by jumping, using their legs and a spring-like mechanism in the body. They are capable of spectacular leaps, covering distances up to one hundred times their body length.

Only adult fleas feed on blood, which they obtain with their piercing/sucking mouthparts. Flea larvae feed on organic debris in bedding or in sleeping areas, and in dust and lint debris in carpeting. However, they are commonest in areas where animals sleep. Female fleas lay eggs in these areas. The eggs take about two weeks to hatch, depending on the temperature. Larval fleas look very different from the adults, having long body hairs, and appearing caterpillar- or worm-like, without eyes or legs. Larvae spin a silken cocoon before transforming into adults. The complete life cycle from egg to egg takes 3-4 weeks depending on food availability and temperature; the warmer the temperature the faster the flea's life cycle.

Adult fleas are capable of living long periods, particularly at cold temperatures, without feeding. In a few instances fleas have been known to live one or two months without a blood meal.

Fleas are responsible for a number of medical and veterinary problems. Flea bites themselves are irritating and can become swollen or inflamed. Scratching can lead to secondary infection. Some flea species are known to transmit diseases, such as plague and murine typhus, and parasites, like the cat tapeworm. Additionally, many pets develop allergic reactions to flea bites.

The most common flea found on household pets, such as cats and dogs, is the cat flea. The human flea is rarely encountered in the U.S.